Budgerigars are a very popular bird in Europe. Originally from Australia, she was imported to the old continent around 1840. Sociable, pleasant to live with, and with a beautiful luminous coat, she was able to seduce and be adopted by many individuals. Find out who she is and how to raise her at home.

The budgerigar ( Melopsittacus undulatus ) is of the parrot order and family Psittacidae. Originally from Australia, it was not brought to Europe until 1840, when it quickly became a great success.

The budgerigars measure 18 to 24 cm for a weight oscillating between 25 and 45 grams. Most often, its dress is green in color and its head is yellow. It has small black spots and stripes on the skull, throat, and wings. Its eyes are black in color and its beak is olive green. On the other hand, it is not uncommon to encounter certain individuals with blue, black, purple, or gray plumage.

The sex of the animal is determined by the color of the cere, which is the bulge located on the upper part of the beak. In the female, the cere is brown or beige in color. In the male, the cere is blue and particularly shiny.

The budgerigars are relatively sociable and appreciate the presence of their congeners. It is even better to adopt at least a couple to prevent the animal from getting bored. On the other hand, know that the parakeet is talkative and that she likes to play. Very gentle, she calms conflict and builds relationships based on trust and security. A budgerigars needs suitable, balanced, and varied food, rich in minerals, vitamins, fiber, protein, and trace elements. Without a good diet, the animal’s life expectancy is reduced, its immune system weakens, its plumage fades and overweight invades it.

It is advisable to give him raw fruits and vegetables (spinach, chicory, carrots, apples, kiwis, and pumpkin), preferably fresh, young shoots, minerals, vitamins, and clay. Cuttlebones are also a good source of calcium.

We advise you to vary the type of seeds in order to take care of your pet’s digestion. Consider dry seeds, milky and semi-ripe seeds, and sprouted seeds for their proper balance and to maintain their health and well-being. Sesame, flax, rice, squash, corn, and chia, but also peanuts, are very interesting. 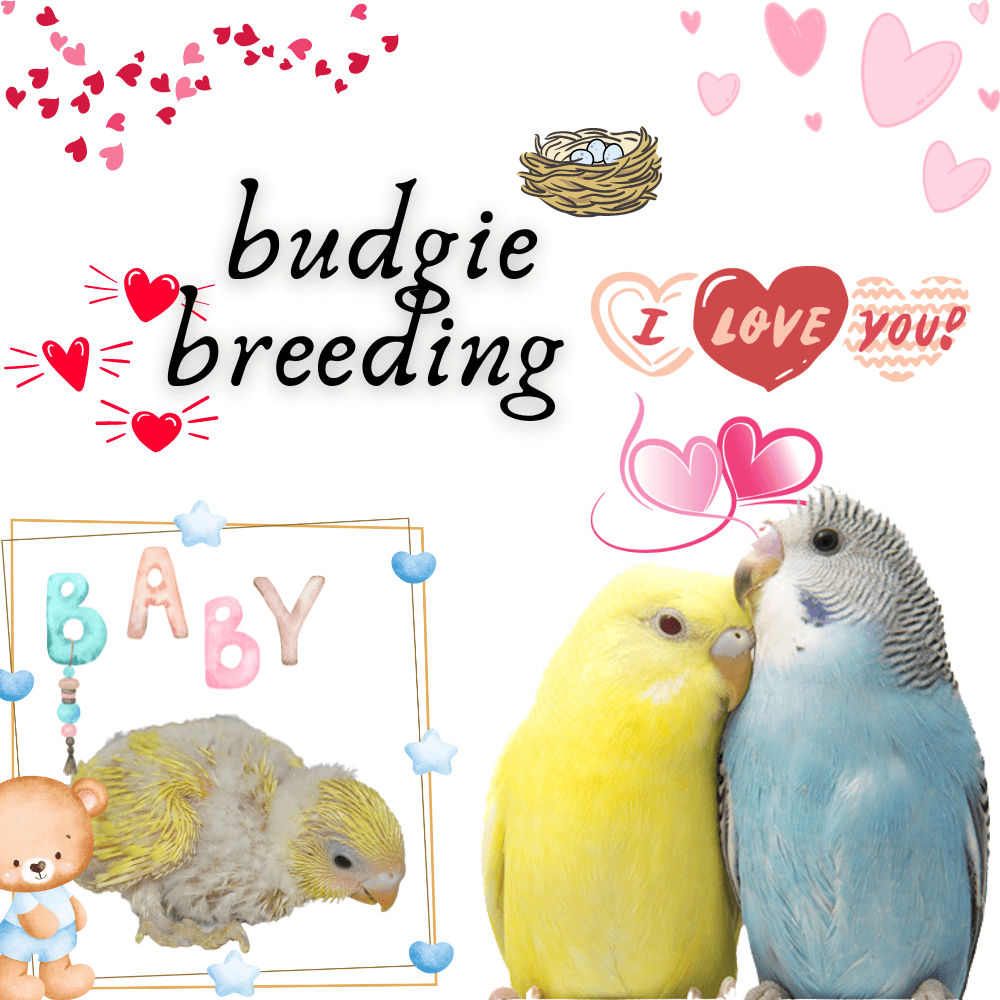 The budgerigar can breed for one year. During the breeding season, the male begins to sing more and is more attentive to his mate, especially by feeding her and giving her affectionate pecks.

After mating, it takes 4 to 8 days for the first egg to be laid, then other eggs will follow, one every two days, reaching a total of 5 or 6 eggs on average, sometimes more. The female then incubates her eggs for about 20 days.

The budgie is born with closed eyes and devoid of feathers. He is fed by his mother, herself fed by the father. The plumage forms gradually, from 2 days after birth, and ends after 5 weeks. It is from this period that the parakeet learns independence by feeding itself, then learning to fly for around 8 weeks.

Up to two parakeets, count at least 1 m², because they need space. Increase the size proportionately if you have more individuals. If you can, set aside a room for them to fly freely.

The cage of your parakeets must be equipped with accessories:

The parakeet needs a healthy environment to reduce the risk of disease. It is therefore important to clean your cage regularly and to disinfect it well to remove viruses and bacteria. A little washing-up liquid mixed with hot water is sufficient for daily use. Also, remember to clean the feeder and drinker every day.

When sick, the budgerigar is listless, inactive, and tends to sleep a lot. She eats little and tries to isolate herself. Its plumage may fade, its droppings change, its outfit change, and its breathing becomes more difficult.

The main diseases that can affect the parakeet are the following:

The life expectancy of the budgerigars varies between 12 and 15 years.